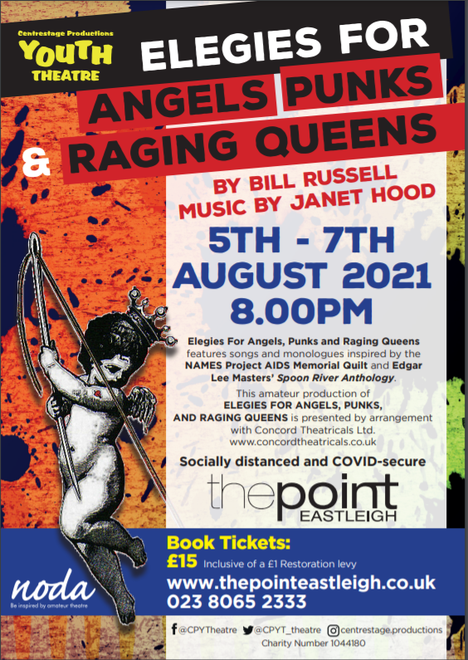 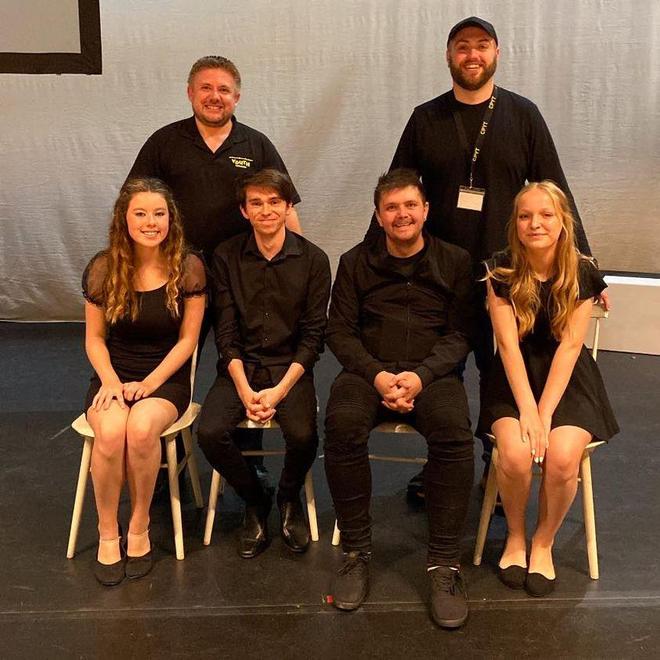 Elegies by definition is ‘a poem of serious reflection, typically a lament for the dead’. An elegy is there to express feelings of something or someone you have lost. So, here we follow the elegies of those who have passed due to HIV/AIDS, all those Angels, Punks and Raging Queens.

The show, with book and lyrics by Bill Russell and music by Janet Hood.

Russell’s speech is so poetic and lyrical, magical at times. There is so much dialogue to enjoy. And Janet’s music is just so beautiful; the amount of emotion within her score is tear jerking, as well as being uplifting in places.

I’m a bit of an aficionado on Elegies, having lived through this period in the 80’s. Elegies is one of my top 10 musicals, having seen it so many times, the first being the original on the west end stage in the 80’s. Since then I have seen it in London twice, in the back of a pub, and the Union Theatre recently.

Centrestage’s Youth Theatre production of Elegies this week at the Point Eastleigh, is one I will add to my list. Co-Directors Will Jones and Mike Mullen’s direction is thought provoking and imaginative. I loved the concept in the way it was performed and staged.

We see just four chairs and various sizes of projection screens. Simple but as the show progresses nothing else was needed. All the prose was performed by 27 young actors, telling their own story’s on camera and projected onto the various screens…Perfect.

Nigel Finch as Musical Director gave us a superb quality of sound from his band and just the right volume for the venue, excellent Nigel.

Praise must go out to all who made this production of Elegies happen, from stage management to lighting and sound, I enjoyed it immensely. Well done to all of you, and also for making me so welcome, it was worth the journey.

Good luck in all future productions.

A most interesting evening and a true and magnificent example of 'the show must go on'! Despite many, many difficulties the cast and crew together with substitutions and understudies (not that you would have know unless you had been told) performed this interesting piece. Great performances and enthusiasm for the project was tangible. Well done to all concerned.

Last night was very thought provoking and took quite a lot of assimilation. The performers excelled themselves.  The performance of a script to camera without audience appreciation is exceptionally difficult but they seemed to manage with ease even the section which were very difficult to put over.  The singing, particularly the duets and quartets were well rehearsed and the emotion really came through.  The musical trio created a really good sound. The simple set worked well and the technical backup team obviously had to work hard with some difficult issues to resolve not of their making.  Simple but effective.

I cannot say it was an evening of delight but complex issues laid bare - thought provoking. Your audiences tonight and tomorrow will thoroughly appreciate all the hard work that has gone into this production.

Thank you for your kind invitation and I look forward to Shrek.

"An amazing and passionate performance"

Elegies for Angels, Punks and Raging Queens features a song cycle and monologues inspired by the NAMES Project AIDS Memorial quilt and Edgar Lee Masters spoon river anthology. The show beautifully illustrates that being a victim of AIDS is not subjected to any particular gender, age, race or sexual orientation.

The monologues are in place to tell the story of the different characters that have died from AIDS which the cast speaks the words in a manner that follows its meaning rather then its rhyme. To get past the current restrictions due to Covid, these are performed via videos that are projected onto the stage. Besides a couple of technical difficulties with this, the idea behind it was smart and effective.

Telling the individual stories of the friends and family members and the way they deal with their loss are told through the beautifully written songs by Bill Russell and Janet Hood. Performed by a very talented quartet involving Tyler Convery, Kiean Jones, Holly Standfield and Summer Hughes. These four produced an amazing and passionate performance. With incredible vocals and gorgeous harmonies balanced with a simple but effective band lead by Nigel Finch. The songs ‘and the rain keeps falling down’ and the finale number ‘learning to let go’ were particularly brilliant! Special mention goes to Kiean Jones who at last minute had to step into the role as Doug and astounded with his beautiful tone and enthusiasm.

The lighting by Becky Starks with the Pride rainbow colours at the end was very powerful and deserves a mention. Centrestage productions and the two directors Mike Mullen and Will Jones should be proud of all cast and all the production team involved. I think we can all agree that it is amazing to be back at the theatre. Well done to everyone at The Point who made the audience feel incredibly safe with socially distanced seating and one-way systems.

Although very moving and at times sad, the performance was also uplifting. Well done to all those involved.

Elegies for angels, punks and raging queens is at The Point in Eastleigh until August 7th.